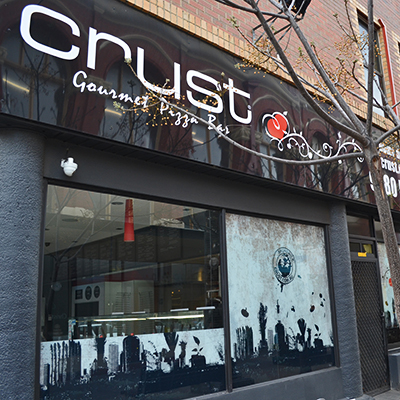 Today’s expose’ of the franchise industry in today’s Age newspaper reveals what Radio 3CR in Melbourne have been saying for years .

Workers in the hospitality and fast food industry have been subjected to wage theft on a large scale for an ever increasing number of years .

In 2007, 3CR was instrumental in exposing the exploitation of overseas workers and students at the franchise chain 7/11 , Unite, a union representing workers at 7/11 and other fast food outlets organised pickets boycotts and legal proceedings against the most blatant exploitation .

The secretary of that union Anthony Main broadcast from the studios at 3 CR mobalising opposition to the practices of this criminal franchise system .

In 2015 we organised a campaign against another exploitative chain of Crust Pizza alleging underpayment of young people’s wages ,young people paid in pizzas ,no penalty rates and the ever present blatant theft from people on 457 visas .

3CR as a community broadcaster has continued to expose the theft of workers wages ,we don’t seek to win Walkley awards although we have been at the forefront of exposing the crooks in the industry since 2007 or before I often wonder if the award winners covertly listen in the station to find out what is really happening .

In an ever constant circle of exploitation of young people in the fast food, restaurant and catering industry, let’s look at another shocking example to rival the exploitation uncovered in the continuing saga of 7/11 workers .

Workers at 7/11 are a constant reminder of what unscrupulous lengths employers will go to as they enslave foreign workers or students, trying to compete in what is supposed to be a regulated labour market.

Blind Freddy (sight impaired) was aware of the shocking exploitation rife within the industry; casual, part time or even full time employees were aware of the untold crimes of robbing workers, but should they stand up to be counted,they are sacked.

The campaign against the 7/11 corporation took 10 years to come to fruition resulting in the Four Corners episode of 2 weeks ago which exposed what I had been saying about the underpayment of legal rates of pay and conditions plus the rorts of the visa system, as far as reaching inside the very portals of the immigration department.

I have previously reported on  people on 417 or 457 visas being employed in the pizza manufacturing industry working 15 hours a day without proper wages, overtime, breaks or OH&S provisions.

So let’s move on to large corporations in the fast food industry and a newly established company that offers franchisees to set themselves up  as the arbiters of wages and conditions they believe are best for the young people they employ .

Let’s look in isolation at one particular franchisee of the Crust pizza chain in Sydney Rd Brunswick , let’s see whether the same exploitation is as rampant as I have been led to believe by the young employees I have spoken to.

Allegations by the young people employed at this store include underpayment of legal wages, no penalty rates for working on weekends, training shifts without pay and wages paid in pizzas.

Further allegations from the young employees include no pay slips, no indication of the hourly rates worked, and verbal threats to employees if they are unavailable for shifts.

One courageous young woman employee went as far to write to me disgusted with her treatment regarding her non payment of penalty rates, no pay slips and no pay at all when training.

I contacted the company where they expressed concern about the rate of pay for the young woman and promised to rectify the problem and urging me not to go public with the allegations until a proper investigation was undertaken by their managing director.

Well you could have knocked me over with a wet tram ticket when the young 14 year old woman was contacted by the franchisee the very next day and threatened with blacklisting her within the industry and refusing to give her a reference because she went to the media about being robbed of her legal entitlements. The company next day reimbursed her for the money they deducted for pizzas as the young woman had never eaten there.

The young woman remains traumatised by then threatening phone call made by the franchisee owner even when she no longer worked at the store, she was 14 years of age!

This reimbursement by the franchisee was a clear admission of the breaches of the national employment laws.

I now have written statements from other young women no longer employed by Crust pizza in Sydney Rd Brunswick , young women traumatised by the treatment they received ,the threats received and most off all the underpayment of their legal rates of pay and penalty rates.

The management of the Sydney Rd franchisee now have a legal duty to repay previous and current employees all their legal entitlements , the office of Crust pizza have the same obligation that their franchisees also abide by national standards which are not only moral but legal entitlements for the protection of young people

The unions also have an obligation to protect employees against unscrupulous behaviour and Fair Work Australia should become involved should these breaches not be rectified.

Another hiccup in my understanding … END_OF_DOCUMENT_TOKEN_TO_BE_REPLACED

Find the archive of radio … END_OF_DOCUMENT_TOKEN_TO_BE_REPLACED