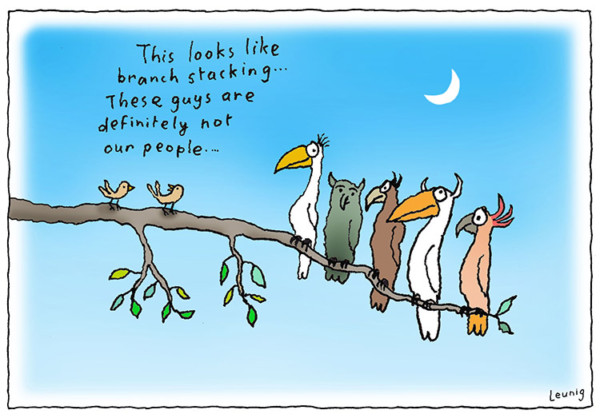 It seems that the Australian Labor Party – as opposed to the Labour movement – has avoided an extreme shift to the right with the expose’ of the allegations of Industrial type branch stacking in the party .

Adem Somyurek, the Minister for Local Government, was about to stage a coup within the party to replace Clare Burns with his factional ally Michael De Bruyn, a member of the legendary De Bruyn family. The gratitude of the whole labor party is now evident following the expulsion of Somyurek with the hope that further expulsions will take place. In a twinkling of a eye many careers in the branch stacking business have crashed and died.

According to all reports, the Chief of Staff of one of those involved Marlene Kairouz, who apparently has stood down from her ministry after assuring the premier she was not involved with any untoward practice, is a well known name in the labor movement, Michael De Bruyn, it’s a fact the he belongs to the De Bruyn family who are well versed in the art of political manipulation.

The De Bruyn family have been responsible for the lowering of wages in the Retail and Fast Food industry over the last 8 years to the tune of at least $ 300 million.  In that time, after colluding with employers and providing unreliable evidence to Fair Work Australia, we saw the cancellation of those awards.

The shop assistants union has been solely responsible for the dirty deals with employers in the past resulting in lower paid workers being robbed to the tune of hundreds of $ millions .

So why would we not be surprised if the apple doesn’t fall far from the tree !

At this early stage of the police and IBAC investigation I cannot wish the sins of the father upon the son, but refer to the damning transcripts recorded over the past 12 months and rely on the taped conversation of Marlene Kairouz. Her words condemn every person in her electoral office..

In a meeting earlier this year, Ms Kairouz, who holds the suburban development portfolio, encourages junior parliamentary staff to take over a  branch stacking she claims involves her more senior advisers including chief of staff Michael De Bruyn.

Her words not mine .

”He ( a left faction official ) was spinning shit last week about going through all our membership forms and  I said to my chief of Staff Michael De Bruyn let  him do it because he has got 2500 of our members to go through . They drop one we put in 10, always call his bluff in reference to placing 10 new members into the party for every member disqualified”

Further to those damning words, Ms Kairouz is recorded describing as “ excellent “ the use of taxpayer funded parliamentary officers to run the operation and directs them to challenge an attempt by the left of the party to weed out branch stacked members.

By now you will have the impression that this woman is not as smart as a builders labourer.

I have said I will wait for the police and IBAC to verify the words that came directly from her mouth I didn’t mention the name Michael De Bruyn but Kairouz  did !! but I have serious doubts he didn’t knew what was going on or as the chief of staff he is dumb beyond belief.

Every person involved with branch stacking whether ministers or officers of the party even ex ministers  need to be expelled for life and if criminal charges are proven then jail sentences must proceed, those on the periphery of this illegal activity must face the full force of the law .

You’re going home in the back of a divvy van!!

Another hiccup in my understanding … END_OF_DOCUMENT_TOKEN_TO_BE_REPLACED

Find the archive of radio … END_OF_DOCUMENT_TOKEN_TO_BE_REPLACED