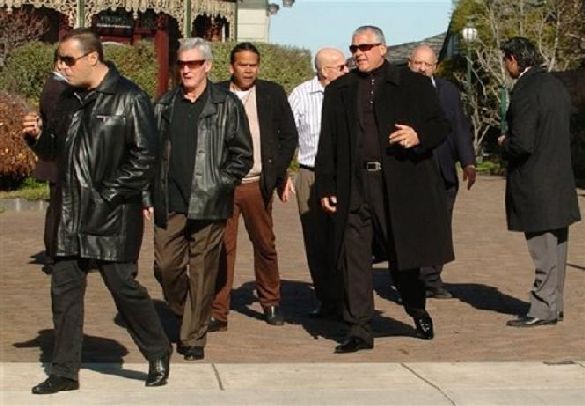 Hard to consider anyone more deserving of the cowards of the year 2011 award than “Fat Mick” Gatto and Autobarn boss Garry Dumbrell.

Fat Mick is promoted by the Herald Sun newspaper at every opportunity as a negotiator and a resolver of disputes.   Hardly a day goes by when he is not featured prominently along with other well known bottom feeders of the criminal world, Roberta Williams comes readily to mind,  Judy Moran and to a lesser extent Mark “no ears” Reid are all promoted by the Herald Sun at some time or other.

Chopper Reid was a” give up” and a “dog” after lagging in other prisoners to save his own skin, his books of fiction are regarded as fantasy by friends and foe a like .

Choppers friends, who incidentally would all fit into the side car of a motor bike, describe him as being as weak as boarding house tea and unable to pull the skin of a rice pudding, Now how’s that for tough.

If this mug wants to write another book rest assured the Herald Sun will have its dibs on it.

Lets get back to Fat Mick and the reason I want to nominate him for the puffed up fake of the year, before the global financial crisis a mob called Opus Prime went belly up causing many thousands of small, but greedy, investors to lose their life savings. One of those investors had the brilliant idea that they would engage Fat Mick and his talented team of negotiators to head off to Singapore where they wrongly believed the money had been stashed.

The Herald Sun promoted Fat Mick’s trip, and photos of him and his Calorie enhanced team were front page news,  I say  calorie enhanced because the picture of 3 fat blokes laden with suitcases leaving on their mission of mercy needed to be seen to be believed. The Herald Sun again promoted Fat Mick daily as he went about his business of finding the mysterious money and returning triumphantly with suitcases filled to the brim with the folding stuff.

Alas, much to the chagrin of the Herald Sun Fat Mick and his 2 Fat mates returned to Melbourne, 3 fat blokes with 3 empty suitcases. I wouldn’t employ these 3 Fat wallies to negotiate a lunch break.

Recently in the  news  was Harry Kakavas. Suing Crown Casino to the tune of $35 million for allowing him to bet and lose that amount over a number of years at what authorities describe as the centre of corruption and criminal activity, yep that’s it,you guessed it – Crown Casino.

Anyway to cut to the chase.  Harry had borrowed a couple of million from his old mate fellow property developer Jarred Mc Cracken ,they say there is no honour among thieves and, true to that adage, Harry was reluctant to repay the currency to his ex mate.

Brilliant idea!thinks young Jarred, lets get that bloke  the Herald Sun promotes as an enforcer and negotiator to put the screws on poor old Harry, meeting arranged, coffee ordered, sitting in the sun in lovely old Bourke St..

Harry was not exactly shaking like a dog shitting razor blades as the Fat boy put the hard word on him to cough up or else, or else what, Harry was heard to say , you’ve been reading your own publicity “youve got a fat head as well ” Get Fucked’  and off into the sunset Harry rode. The Fat boy nearly chocked on his equally fat cigar.

Disaster number 3 for Fat Mick and the Fat Boys came in December of  2009 ,the millionaire director of the Autobarn spare parts retailer Garry Dumbrell hired the Fat Boys as enforcers to negotiate on his behalf with his elderly neighbours in a land dispute.

Alan and Colline Miller aged in their late eighties rushed from their holiday farm after being warned that Fat Mick and Fat John Khoury were supervising the erection of a new fence between the properties which took away an old council lane  into Dumbrells property.  The disputed land is worth $150,000.

To terrorise an elderly couple in this way is nothing short of thuggery, the sort of thuggery that is conducive with the promotion of criminals in our society.

The award for coward of the year goes to Dumbrell for employing the Fat boys to intimidate this elderly couple, and to the Fat boys for lacking the courage or the guts to tell Dumbrell to go fuck himself. In all the actions of cowards!!

Another hiccup in my understanding … END_OF_DOCUMENT_TOKEN_TO_BE_REPLACED

Find the archive of radio … END_OF_DOCUMENT_TOKEN_TO_BE_REPLACED