IF YOU DONT FIGHT YOU LOSE

It was an interesting start for the day.

After being picked up from our hotel we started on our historic journey on the internationaly renowned Rocky Mountaineer up to the Olympic village of Whistler in British Columbia.

Minutes before arriving at the train station our tour guide said “by the way the staff that service the train are on strike”. After the initial shock we were then informed that the workers who act as guides and provide excellent service “were on a picket line”‘

Talk about being railroaded!!
Their leaflets said

“We are sorry that we can not be with you today so that you may experience the guest service excellence that the Rocky mountaineer is so famous for.Collectively the onboard attendant team has over 900 years of experience working on the train and would love to show you the passion and the integrity with which we do our jobs however this is not possible because the management have locked us out for asking for reasonable conditions in our workplace“

These workers have been unable to negotiate what they deem as fair and reasonable, have been locked out, and scab labour brought in. 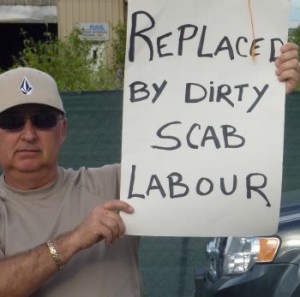 In order to assess these claims believed unreasonable by the company, let’s look at the facts, these workers have foregone a wage increase in order to be paid reasonable overtime.They have given over 900 hundred years in loyal and dedicated service only to be treated in this shabby way.

In Canada the industrial laws demand that if you work more than 8 hours a day you are entitled to be paid overtime, but because of frequent delays due to weather, rock slides etc some workers are working 11 or 12 hr shifts and not receiving overtime.

This is not a case of greedy workers as the company may claim, but of workers demanding a fair wage for the excellent service they offer to tourists from all over the world and for which the Rocky Mountaineer is famous.

The Teamsters union have been negotiating this claim for an excessive period of time during which the company has been training management in the role of “replacement workers” that is a very nice way to describe a scab who is willing to break down your conditions and take the food off your childrens table while at the same time put out their hand for the conditions you are willing to fight for and win.
.
The strikers were not asking people not to cross the picket but to let us know that we would be served by scab workers trained secretly in the previous weeks knowing that there was industrial disputation pending. 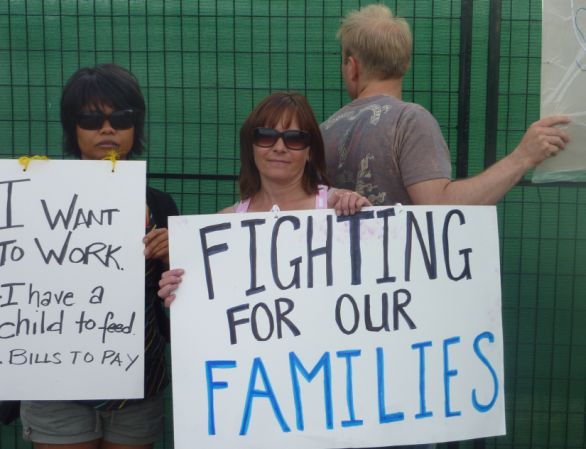 Maybe there are different laws in Canada,or the same regressive laws that face Australian workers.

Remember the Maritime dispute in 1998 when scabs were brought onto the wharves, masked thugs and dogs? Australian workers will never forget those dark days, but they ended with victory for all Australian workers

As an act of solidarity we met the strikers, spoke to them and asked how we as Australian workers could assist and inform others about the unfair treatment.

We intend to contact our relevent unions in Australia to send messages of support and encouragement and ask you as workers to google the management of the rocky mountaineer and express your disgust at the way they are treating their loyal employees.

P.S. This is a commercial clip for the Mountaineer. As you can say, it’s terrific, pity the workers aren’t treated with respect.

Another hiccup in my understanding … END_OF_DOCUMENT_TOKEN_TO_BE_REPLACED

Find the archive of radio … END_OF_DOCUMENT_TOKEN_TO_BE_REPLACED