Before I left the Liquor Trades Union which represented brewery, hotel, restaurant and fast food workers there were some campaigns yet to be won.

In the late 70s and early 80s a new scourge was to be inflicted on workers in the hotel and restaurant industries. Topless bar attendants and waitresses!!

The scourge was to spread quickly unless there was a United campaign by, not only this union but unions in general combined. Union organisers would have to show an extraordinary amount of courage in a industry renowned for a fierce criminal element.

Organisers trying to implement OH&S practices and blatant sexual discrimination against other women working in a industry where, if this practice was to spread, topless would become the norm. The criminal, and other shady elements trying to introduce such a practice, were sure to put every obstacle in our path.

NO TOP NO BEER

The brewery workers stepped up to the plate and decided to join in their own campaign to protect fellow unionists working in the same industry. Stop Work meetings were held in every brewery, resolutions passed and industrial action promised. Brewery workers were firm in their resolve. They knew that, should this novel practice become the norm, then the decent, hard working, intelligent well-groomed women employees who were not willing to go topless would be extremely limited in finding work.

So the No top, No beer practice was introduced.

Employers indulging in this practice were visited and told in no uncertain terms of their blatant discrimination against workers not willing to dress in ways which would place them in danger of sexual assault, as only women with perfect bodies would ultimately be those employed. There was also the fact that employers were willing to use these women by paying them well over the going rate, up to five times the rate, leaving other hard working women to survive on the hard won wages and conditions fought for by them, and by the union.

The Tarmac hotel out in the western suburbs of Melbourne went even one step further. They played pornographic movies in the bar and lounge in sight of the female staff and obviously in sight of drunken, easily influenced sexually motivated men.

A Bit of a Prude?

After protracted negotiations with management. they saw no harm in the practice and suggested I was be a bit of a prude. Well, the insult “ A Prude “

I couldn’t wait to let our members at the brewery know of my failed talks with management at the Tarmac hotel. The instant reaction of solidarity with the female workers was to pass a resolution confirming previous industrial action.

All the Sunday papers were on to it. Five topless women, organised by the criminal element in the hotel industry and the sensationalist media in tandem, turned up in the union office the next day. Fronting up at the front desk, I was summoned to front the women with cameras flashing and videos whirring, hopefully with my faced flushed with embarrassment.

My confession is that I don’t mind half naked women if no exploitation is involved. Well you could have knocked me over with a wet tram ticket, they continued the theme in the headlines of the newspapers that I was a forty year old prude – with photo mind you. The shame, the ignominy, how was I going to hold my head up in the trade union movement for attempting to wipe out this insidious practice? I even had thoughts of people crossing the road when approaching, people spitting on me in the street every time they picked up a right wing rag and seeing my mug.

No, the victories came fast and furious. Every hotel employing topless bar attendants or waiters were now on a final warning to cease this practice or answer to union members employed at the brewery.

The first casualty – the Tarmac hotel. But they were warned. I told them to consider filling the cellars with coal because the brewery workers were not going to supply any beer sourced by their labour from that point, and a cellar full of coal might help them survive the coming winter. It’s called cap in hand, the cellars were soon running low on the amber liquid and bosses, conflicted with taking down their pornographic movies and sacking the women prepared to break down hard won union conditions for a price, soon mellowed. 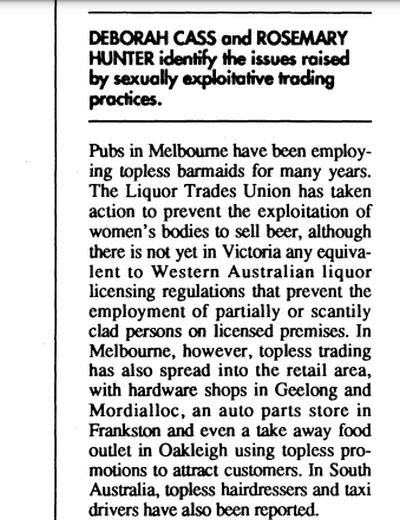 As Paul Keating would go on to say at a latter date in history, a conga line of Publicans and their wives beat a path to the union office to offer their sincere condolences for putting profit before people in an already lucrative business.

The Tarmac was the first hotel. Many were to follow, but not before the criminal element had exhausted all the means of intimidation. I was to be taken to the back of what is now called Maxims, an adult entertainment venue in Sydney rd Brunswick, at the height of the campaign and had a gun placed at my head trying to convince me to see their reason. I thought for a long moment but I’m still here . But the Reg Grundies needed attention.

The sexist nature of employment was to trickle into other bosses willing to make a quick quid using women as the tool.

Can you believe that at the same time as our campaign was in in full swing the grubby sections of the employer groups began with employing topless sandwich hands, topless hardware assistants and topless hairdressers. Thankfully we were able to cease the practice before seeing topless parliamentarians or, worse still, half naked bosses.

On a different note, when publicans indulging in this practice tried to justify the exploitation of woman were asked if they would employee wives or girlfriends behind the bar semi naked, these were fighting words. How dare you even suggest that we would subject our loved ones to such a display of semi nudity in public? Well then, how about you publicans doing a few hours with your penis hanging out, just make sure it goes nowhere near the drip tray. Apoplexy!!!!!

With tremendous help from brewery workers and militant women in the workforce, this degrading practice is now a thing of the past and now only seen in a very few exclusive mens clubs.

Next episode before I was recruited into the most militant trade union at the time, the Food Preservers Union ( FPU) one more campaign .

Wage Theft is not a new phenomenon. It was absolutely rife in the 70s and 80s in the hospitality industry. With the union trying to have the award complied with, and conditions maintained in a industry then, as now, having to compete with bosses willing to rob and exploit, George Calambaris and his ilk couldn’t hold a candle to that mob.

Listen to Left after Breakfast every Friday morning starting at 9 am . 3CR 855 on the am dial .

Another hiccup in my understanding … END_OF_DOCUMENT_TOKEN_TO_BE_REPLACED

Find the archive of radio … END_OF_DOCUMENT_TOKEN_TO_BE_REPLACED