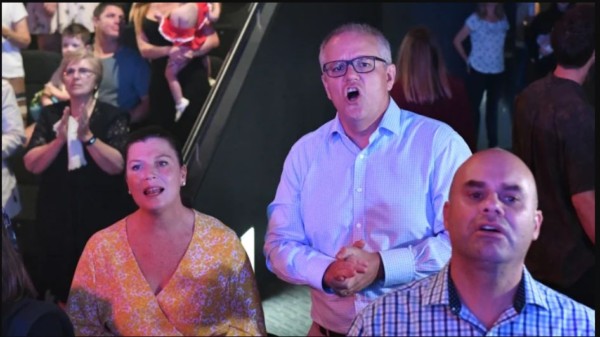 It’s very important to not condemn a person for one particular aspect or action of their lives which may haunt them for the rest of their careers .

Meaning judge a person by their good or bad deeds over a lifetime not a five minute window in a long or otherwise distinguished career .

I judge a person by their character, their deeds, and how they treat others in everyday life.

So we come to the action or non action to our current prime minister Scott Morrison who, in his own words. declared himself as doing god’s work on earth by the laying of hands on simple folk. Simple folk don’t need such false idoletry needing more concrete action from our elected members of parliament.

THEN HE PULLED A HAROLD HOLT AND DISAPPEARED

Scott Morrison went missing during the massive bush fires that raged through Australia last year arguing he didn’t hold a hose and spent time in the safety of Hawaii , what he meant was the he would have been as useful  as a spare prick at a wedding putting his life on the line for us simple folk .

Further, his absence was noticed primarily as 900 of aged care citizens died in the aged care facilities under the auspices of his federal government. He would have liked to do more but I don’t think he’s good at holding a syringe

But to the essence of the man, to fully evaluate the  principles or ethics of the character I remember in February of this year of the prime minister devoid of any feelings for family embarked on a vaccination programme including himself .

Scott Morrison sacrificed his body to the altar of medical science without hesitation a brave act by a brave man ?  Let’s see.

One of the first people in Australia to receive a pfizer vaccination in February his first shot was followed 2 weeks later by the second, assuring him almost full immunity not afforded to the aged the sick and the disabled residents of aged care and disability facilities even until today

The sting in the tale here is that the same man of god having received his vaccination allowed his own mother to wait two months to receive her first and she waited twelve weeks for the second .

WHY . Simply read between the lines ! Scott Morrison got the more  potent Pfizer dose while his darling mom had to wait for 2 months to get hers, yep you don’t have to be as smart as a builders labourer to figure that out .

Another hiccup in my understanding … END_OF_DOCUMENT_TOKEN_TO_BE_REPLACED

Find the archive of radio … END_OF_DOCUMENT_TOKEN_TO_BE_REPLACED